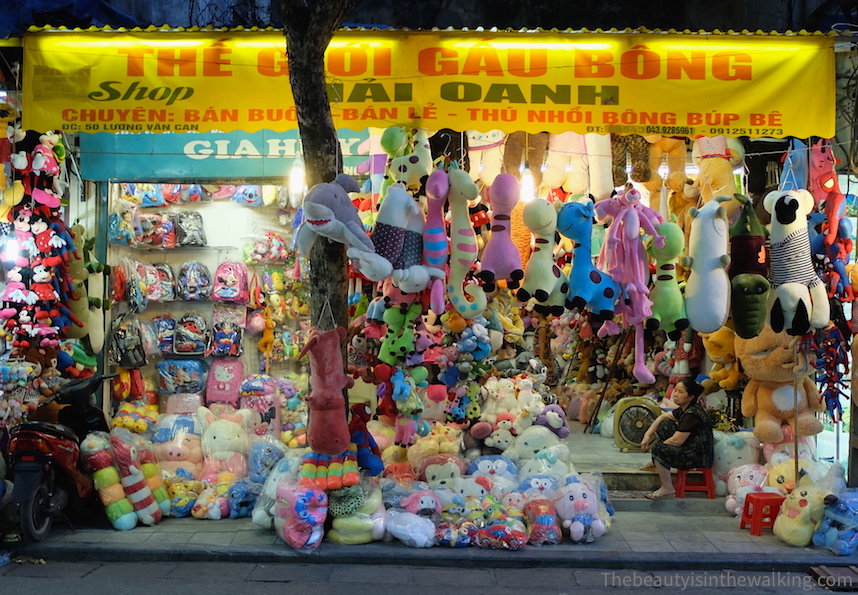 It has always been hard for us to choose between countryside and cities. We like both the calm and slowness of the first and the tumult and energy of the second. So, after many stops in small cities and several passages in nature, as in the Mekong Delta or in Phong Nha national park, we were happy to move back to a real big city. A place where we are drowned in the flow, noise, history and everyday life, where extremes stand together, and everyone can appropriate space in their own way.

Hanoi. The “city beyond the river”, charming ancient capital city, by turns neglected, chosen, and then victorious. Hanoi, the second most populated city after Ho Chi Minh City, in which we spent two weeks. We would be lying if we said that we got to know it because it is so huge and diverse. We merely kept moving between the Old Quarter, the French Quarter and Uncle Ho’s Mausoleum. Which is already quite a bit! There is so much to see if we take time to look around. Here are some little bits of Hanoi, gathered here and there.

Or die ? The thing no-one can miss when arriving in Hanoi is the noise and the road traffic, and particularly the scooters. Of course this is a Vietnamese characteristic but it seems that in Hanoi there are even more of these engines and that they are riding every single street of the city: every scooter here is on its territory. Incidentally, it looks like as if the already very narrow pavement has been made only to park scooters. Pedestrians! Mind where you put your feet and stay alert, a scooter can no doubt hide ten others, so watch it! Well, anyway, scooter riders won’t fall to honk the horn to tell you to throw yourself onto the pave… hm the stre…, well anywhere you will be able to be safe because in fact they is no space allocated to you in the street. Go on, then, no hard feelings!

FIVE TRUTHS THAT YOU SHOULD KNOW ABOUT SCOOTERS IN HANOI

Bonus: Courtesy is… No, just forget it!

Located north of the Hoàn Kiếm Lake (Hồ Hoàn Kiếm), this famous quarter is a fantastic area to walk around and enjoy some local life, to take a dose of Hanoi’s everyday life. We can walk from a street to another, as if we were jumping from a world to another. This quarter is clearly marked by its history. Each street beginning with Hàng is dedicated to a trade; for example, Hàng Bạc was the street where precious metals were sold; Hàng Bộ, baskets, Hàng Da, leather, Hàng Đào, silk and so on. Most of the shops are very narrow and they give the impression of being pressed one against the other. The reason is that shopkeepers used to pay a tax based on the width of their shops.

Hàng Đào Street (silk street). Above the shops, we can often see old buildings with a beautiful architecture.

A blacksmith in Lò Rèn Street.

The propaganda style has become a real business.

Train passes between houses at the crossing with Điện Biên Phủ Street.

It is very pleasant to walk around Hoàn Kiếm Lake at any time, and relax. At the end of the day, we can see people doing some sport. We happened to meet people there: young Vietnamese people come here in the hope of speaking a bit of English (or even French!) with Western tourists. On the lake, we can visit Ngoc Son, the Temple of the Jade Mountain (see below), and see the Turtle Tower that celebrates the sacred animal, which is linked to the legend of the sword.

Hanoi is the perfect place to enjoy some Vietnamese cuisine, as there are many street food stalls and restaurants. Standing the ones next to the others, they put their mini tables and chairs made of coloured plastic on the pavement and attract customers with persuasive smells and tenacious employees. So, the Vietnamese capital city is well known for its street food – some guides even propose street food tours to the tourists – but it also provides a lot of little good and cheap restaurants.

A little restaurant at 52 Lý Quốc Sư Street, on the left hand-side of the temple, where we can eat bánh Gối (pillow cakes), spring rolls, dumplings…

Hmm… Bánh cuốn (steamed rice pancakes). Yes, but the ones from the 14 Hàng Gà Street, among the best in town.

A Ha Noi beer with a view on Hoàn Kiếm Lake.

During our stay in Hanoi, as we often hung around in local and « modern » cafés, we ended up by discovering that we had a serious weakness (should we say addiction?) to coffee-yoghurt (yoghourt + coffee + sugar + ice: easy!). But we also tried the ca phe trung da (iced egg coffee), which in fact tastes more like custard than egg. Delightful!

+++
Interesting blog and articles about street food in Hanoi:

{RECIPE} Phở – rice noodle soup with meat, served with freshly cut herbs and half a lime, is without a doubt the most traditional dish in Vietnam. It was said that it takes its origin in the French pot-au-feu but it would be a quick introduction (a bit of history here)… Well, here is the recipe of the phở.

From a cultural perspective, there is a lot to do in Hanoi with a few very interesting museums and monuments. We didn’t have time to see all what we were interested in, and in particular the well renowned Vietnam Museum of Ethnology on the 54 ethnic communities living in the country, but it will be an excuse to come back.

This Confucian temple built in 1070 by Lý Thánh Tông, the third emperor of the Lý Dynasty, welcomed during around 840 years the sons of Mandarins and the aristocracy who came here to study and become lettered and senior officials. The teachings were based on the moral and social codes formulated by philosopher Confucius.
The temple had no religious purpose. It is divided in five courtyards, built in the traditional Chinese North-South axis, separated by doors reserved for the nobility; domestics, servants and soldiers used the side alleys. We can see the statues of former directors and professors who marked the life of the academy. Ranges of stone steles put on the back of giant turtles remind forever the name of the graduates of the various promotions.
Today, many students come to the Temple during the exam period to pray the illustrious professors and bring luck for their tests.

Entrance of the Temple of Literature , Hanoi

The building, which houses the Museum of Fine Arts used to be a catholic high school for young women built in 1937 during the French Indochina period. The Museum shows some beautiful pieces of Vietnamese art of silk and lacquered paintings, as well as pieces from the 20th century until the 70’s, on the first and second floors. In some works of art, we can note the Soviet realism of that time: surprising to see Hồ Chí Minh in a lacquered painting… The ground floor is dedicated to Prehistory and Buddhist statues.

Painting from the collection of the 20e century, Museum of Fine Arts, Hanoi

It required time and a fully available brain to visit it. This is not a museum that we can visit during a short stay in Hanoi, but we truly enjoyed wandering in its somewhat dusty alleys. Located in a colonial style building of the French School of Asian Studies (École française d’Extrême-Orient) since 1958, it shows a quite impressive collection of votive objects, jewels, sculptures, and arms… from the Prehistory to the colonial period, including all the dynasties and eras that succeeded each other (be careful: at that point, the brain can start to overheat!): the Trân, Nguyen, Lý dynasties, the Cham, etc.

This is one of the three main catholic churches in Hanoi and also the oldest one. It was built by the French in 1886 in a neo-gothic style.

The Temple of the Jade Mountain (Ngoc son)

Situated on the Hoàn Kiếm Lake, this temple was built in the 19th century in honour of General Trân Hung Dao, winner of Mongolians in the 13th century, as well as of the precursor of La To Medicine, of the Lettered Van Xuong De and of the genius of the martial arts, Trân Vu. We can reach the temple by a red lacquered bridge built in 1875. Once inside, we can see the famous giant turtle from the legend of the sword (see above), which has been stuffed.

Entrance of the Temple of the Jade mountain

Inside the Temple of the Jade mountain

For those who have already travelled to Russia, this monument is strangely reminiscent of Lenin’s Mausoleum on the Red Square in Moscow. Almost similar, as this is where Hồ Chí Minh lies and his body receives the same regular treatments to keep it in a good state. So, it is possible to go inside the mausoleum to see it; we were only content with passing in front of the enormous monument of granite, which was built on the square where the Independence of Vietnam was proclaimed on September 2nd, 1945. And it was more than enough. As a side note, Hồ Chí Minh had decided before he died that his ashes would be spread over three hills, in the north, the centre and the south of the country, as a symbol of the reunification but the Party decided otherwise.