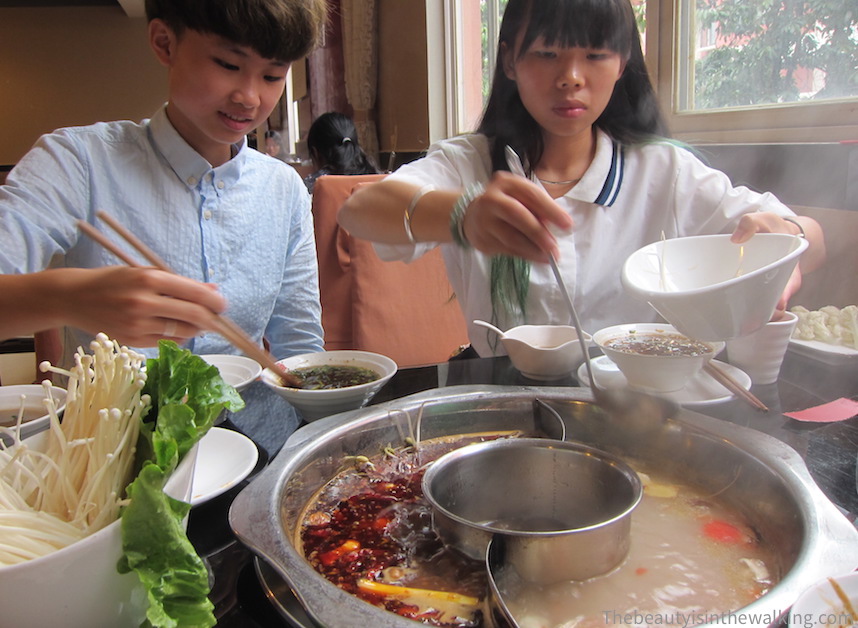 We arrived in the city of Pu’er, Yunnan, China somewhat by chance, and we must say without having organized anything. We got there Southeast-Asian-style – understand without any accommodation address or any reservation, without considering that here, hotels are expensive and communication is difficult. So it seems that someone put Tinkerbells on our path.

At the bus station, a young woman was sitting next to us waiting. She might know about a cheap accommodation around here. As she was a little shy and didn’t speak a word of English, she quickly answered in the negative.

But then, as she saw us leaving with a guy whom she didn’t seem to trust, she caught up with us on the car park. Pulling her enormous wheeled suitcase (as any self-respecting Chinese person!), she hailed a taxi and told us to get in. She then made a few phone calls to some relation before taking us to the reception desk of a very comfortable and affordable hotel. Quite unexpected!

We never did manage to communicate to know whether she was leaving the bus station or arriving there, but one thing is certain, she changed her route for us.

Behind the reception desk, two curious and cheerful girlfriends. They look excited about our visibly exotic and exceptional visit in their establishment.

One of them speaks a bit of English and begins to check us in. From then on, they will devote all their time to us during our two days here in the city, feeling that they are on a mission of the highest importance: taking care of us. Starting with breakfast the morning after at 9 o’clock sharp to have a Yunnanese noodle soup. So we just let ourselves being looked after, happy and surprised at so much care being bestowed on us.

That’s how we ended up tasting a real Chinese hot pot, which had a very exceptional taste on that day.

You probably know what a Chinese hot pot is. This is a convivial meal, as it is a dish that is shared by several people (like a good Raclette from our region in the French Alps!) and it’s also a pretty healthy dish as it is made out of ingredients good for your diet (not so much like a Raclette…).

It consists in a broth – well, actually two here, a VERY spicy one and another one softer – in which one cooks the ingredients chosen according to one’s personal taste from among a long list (meat, fish, all sorts of vegetables, mushrooms…) to eat them dipped in a sauce made to your taste.

This dish is found in many countries in Asia (Southeast Asia, China, Japan…) under the name of hot pot. The type of broths and the ingredients used may vary, but the principle is the same.

On the left: the spicy broth; on the right: the softer one; and in the middle: a broth to be drunk out of a small side bowl.

Fish as fresh as fish can be. (Oh look! It is still moving…)

You can compose your own sauce at a provided buffet, and choose to have it more or less spicy, with more or less herbs, with a more or less stronger taste, etc. Among the ingredients displayed, you can have soya sauce, fish sauce, sesame paste, several kinds of peppers in paste or flakes (Yunnanese people love eating spicy food), sesame oil, ginger extract, coriander, minced spring onions, crushed peanuts, etc. Once you have put everything wanted in your bowl, you have to mix the whole thing and finally pray the whole thing isn’t too hot dip the cooked ingredients in before enjoying them.

And as a drink, a freshly made watermelon juice or a hot green tea.

{Recipe} How to make a Chinese hot pot broth?

I know that you’re now hungry.

So, in order not to let you mouth-watering in front of your computer, here is a good recipe found on the Internet to learn how to make a good Chinese hot pot broth.

Actually, the recipe from the link below is very close to what we ate, with a spicy broth and mild one, even if it is a Sichuanese version (with some Sichuan pepper – BTW great idea!). Yunnan and Sichuan are neighbouring provinces.

How to make Hot Pot Broth by China Sichuan Food.

The ingredients to cook in

With this recipe, you just have to prepare some ingredients you like (meat, fish, vegetables, mushrooms) to cook in the broths and that’s it! Oh, and maybe you can also have an Australian or Californian Cabernet-Sauvignon or Point Noir, or if you’re more into white wines, perhaps a Riesling from Alsace, France or a Chardonnay from South Africa. Sorry, can’t help it…

Well, you can make it Chinese-style by mixing to taste some soya sauce, sesame paste, herbs (coriander for example), thinly chopped green onion, grated ginger, fish sauce, chilli pepper oil or flakes, or whatever else you like to dip in the cooked ingredients before eating.

Otherwise, here are a few rather appetising recipes of sauces. I found them in a travel forum and it seems that they come from a cooking book whose name and author weren’t specified, so unfortunately I can’t mention them. If the author shows himself/herself, I would be happy to add the source.

– 2 tablespoons of grinded chilli peppers or flakes
– ¼ cup (60 ml) peanut oil
Heat the oil, add the chilli peppers and take them out before they burn. Serve cold.

Sauces for fish and seafood

See all the articles about food.