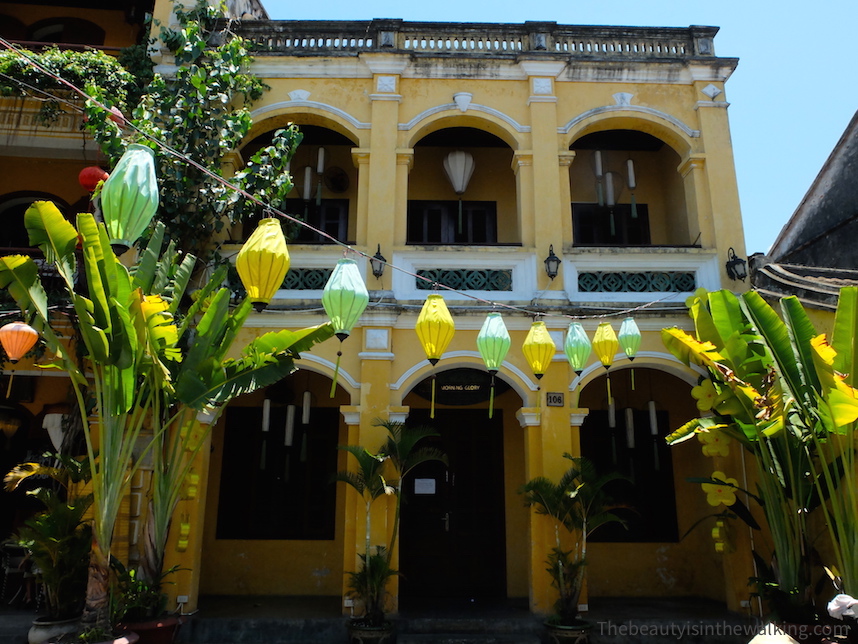 No need to introduce the beautiful and delighting Hoi An anymore. Located in the middle of the Vietnamese coast, this little town of 120 000 inhabitants has been strongly developing tourism since its old town was listed as World Heritage by UNESCO in 1999. How lucky, you may say! Well, yes and no. Yes, because it has greatly contributed to restore many old houses of the old town and they are simply beautiful. But on the other hand, Hội An is now caught in the infernal circle of mass tourism. Let it decay or exploit it…

Hoi An, or The town of lanterns

That being said, Hội An keeps charming and delighting its visitors with its so picturesque lanes with lanterns, its mixed-styled architecture and its numerous cafés and restaurants. It is a “must-stop” on the coastal road on one way or the other.

Located on the silk trade route, Hội An used to be a thriving town and expanded in the 15th century before its harbour was abandoned in favour of Đà Nẵng’s, 30 km towards the North. We can still find many tailors within the town, witnesses of the old times. By the way, it is possible to buy a tailor-made suit for a reasonable price, with paying attention to the quality of the finish and the fabric.

To enter the old town, we must pay an entrance fee of 120,000 dongs (5.5 USD), which offers five free visits of places to choose among a list of around ten spread somewhere in the old little streets. Among them, the Tấn Ký and Phùng Hưng Old Houses and the Trần Family Home and Chapel, sumptuous old constructions with a Chinese, Vietnamese and Japanese mixed-styled architecture. They are still lived in by the descendents of the Chinese upper-class and trader families of the time. Chùa Cầu, the well-known Japanese pagoda-bridge, built in 1953 to link the Chinese and the Japanese areas, is a must-see and a gorgeous construction. Two couples of monkeys and dogs are guarding each end, symbolising the year they started building it and the year it was completed. Two hundred meters from here, a votive plate aiming at protecting the bridge has been found, after having been hidden by a tree. The belief says that if we remove the plate, the bridge will fall down. And finally, Phúc Kiến temple, dedicated to the Goddess of the Sea, is a wonder of colours and serenity.

Just wandering around in the streets is, as a whole, an attraction. We could spend hours in going into the long alleys surrounded by yellow-painted old buildings: in the main streets, but also in the French quarter, the Chinese quarter, around the market also as an excuse to buy some fresh fruits while passing by…

Hours we said, if the heat wouldn’t force us to take refuge in a café or in an ice-cream shop like Enjoy, on the other side of the river. Quality ice-cream (strangely rare thing in Southeast Asia) and exotic flavours that deserve a try like durian, pandan (long green leaves with a somewhat vanilla taste), taro (root similar to sweet potato), soursop, kumquat, green tea…

Staying in a hotel outside the old town is a good way to discover many little restaurants far cheaper and more authentic than those in the centre, and ask for specialities of the region or other dishes with influences from elsewhere. Among those we’ve tasted: Cao lau (noodles, pork, tofu, vegetables and herbs, crackers and bouillon that we mix together before eating), the awesome Banh Bao Vac or « White roses » (rice raviolis filled with shrimp or pork served with a sauce), but also fried wontons, an exquisite banana blossom salad with shrimps… A few of them have been tasted at the Café 41 our current canteen, that serves delicious family cuisine and a great of service… and by the way, the best vegetable fried spring rolls we’ve ever tried.

One of our favourite moments in Hội An was certainly our bicycle ride to Cam Ha (on the road towards the North and An Bang beach), especially to visit the Tra Qué organic vegetable garden. An idea grabbed on the French-speaking web site Goodmorning-Hoian.com (which provides information and a map to reach the place and get one’s bearings once there).

We won’t lie; we are not morning people. So it’s always hard for us to get out of bed at such an early hour, but when we manage to do it, it is nothing but happiness. Instead of having breakfast, we had vigorous pedal strokes that could have woken up a buffalo in the middle of a big nap. Right after going out of the town, we rode across widespread rice fields sprinkled with small conical hats. The working day had already begun hours ago whereas we hardly believed that life could start at this very early hour. However, a marvellous show of peaceful work, or even of the fauna and flora, such as these beds of pink lotus flowers marking a limit between two rice fields or even those buffaloes eating grass or taking a bath.

Once we arrived at the Tra Qué garden, we parked our bicycles. Here it’s very quiet and we are faced with a vast veggie garden, drawn in perfectly straight lines on several tens of meters, and again small conical hats here and there. Vegetables and aromatic herbs slowly grow in rows separated by a strip of earth on which no weeds dare come out. No pesticide or GMO, only local fertilizers like seaweed from around here. The ancestral farming methods remained unchanged: watering with two watering cans hanged up at the end of a flat wooden pole held on shoulders, manual cultivation and picking (with scissors!). In total, eight tons of vegetables are sold mainly to restaurants in Hội An. It just shows that we can choose to take advantage of tourism for sustainable purposes.

It’s now 9 o’clock in the morning and we would gladly have a bite. For want of finding an open restaurant around here at this time, we finally found a square of grass in the middle of rice fields. We had a delicious juicy mango, while we wer watching at a pack of impertinent white ducks somehow guided by their owner. Happiness is in the field!

Read other articles about Vietnam.