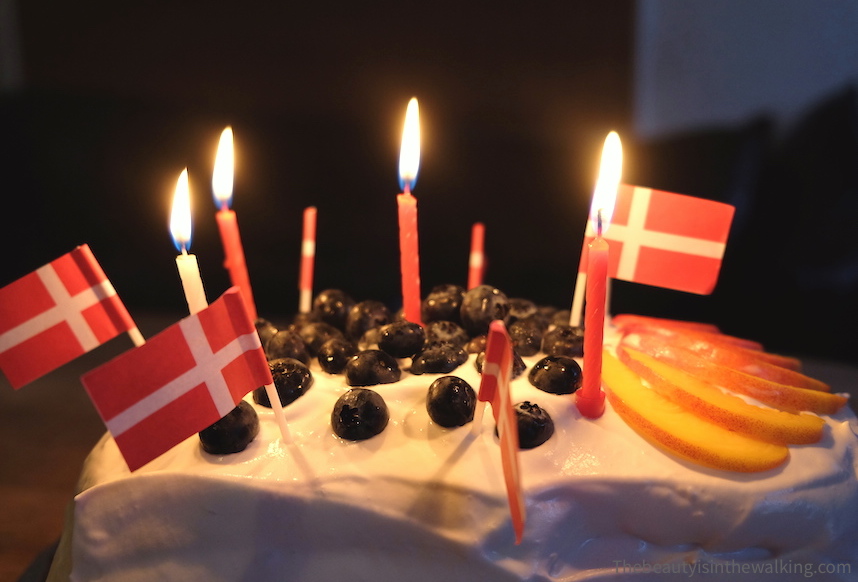 Last weekend, Erik and I we each had our birthday at one day apart. In Denmark, people usually invite some friends and family on this occasion to eat cake and/or have dinner together. This year, as we are still in a kind of transition, we’ve decided not to organize any party. However, we still took advantage of our weekend and a sort of Indian summer to go to the Vild Festival (wild plants festival) on Saturday and to wander in some still unknown areas of Copenhagen on Sunday. And I also gave a try to lagkage – which means layer cake –, the traditional Danish birthday cake.

A question of time

It seems that the weather has mercy upon us who spent a year and a half in a never-ending summer during our long trip. Although we are dreading the winter to come, we are looking forward to feeling the cold again. But the fact is that the weather remains gorgeous pretty much every day since we arrived in the Danish capital city, like an ultimate favour before the flood. So, you can imagine how much we enjoy it.

We started walking along the lakes (Søerne), along which we live. These five stretches of water in a row used to be a sound before being dyked up. Today, many people come to walk around, run, sunbathe seating on a bench, or even paddle boat on the water. It is a very nice place. Then, we walked on towards the Vesterbro district. We took the passageway under the majestic Ny Teater (New theatre), walked up Vesterbrogade, got a bite in a nice home cooking restaurant with some frisk fisk (breaded fresh fish) and pasta, before going on towards the very trendy Latin Quarter. And finally, we slowly took our way back home, passing by the coloured multiplex Palads Teatret, before heading back to the Dronning Louises Bro (Queen Louise Bridge), which stands in the middle of the lakes.

It’s not very complicated to make. It is made of a sponge cake cut in three layers and filled up with creme patissiere, fruits, and even some jam, cookie crumbles or marzipan. The whole is coated with whipped cream. You’ve been warned.

For my part, I made my own version according to my tastes and cravings, and baked a Nectarine and Blueberry Lagkage with Coconut Whipped Cream, which is basically sponge cake, fruits, vegan creme patissiere, and coconut whipped cream.

What surprised me when we have once been invited to a Danish birthday party, is that the Dannebrog – the Danish flag – is everywhere: on the cake, on the walls, and even hoisted in the garden. It is a synonym of celebration, and the Danes take it out for any kind of celebrations. In France, we can’t even imagine a second putting the French flag on our birthday cake, and even less in the garden. It’s a question of history and symbol. But here, it’s festive! Oh, and here we congratulate people instead of wishing them a happy birthday. Honestly, I’m sure that in those conditions, we would all be happy to be one more year older every year. Congratulations! You are one year older today! That’s awesome! It’ll be two for me, please!

We will proceed in five times: the sponge cake, the creme patissiere, the fruits, the coconut whipped cream and the assembly of the cake.

I got inspired by the recipe of the French cooking blog Une plume dans la cuisine, who made me dream with its easy recipe.

I chose a vegan creme patissiere recipe for a lighter cake. It’s already heavy enough… For that, I got some inspiration from the recipe of the French cooking blog Laetitia Cuisine.

Choose ripe fruits and cut them into pieces if necessary.

Note: I chose nectarines and blueberries, but you can put any fruit you like, preferably seasonal and organic. This cake is particularly tasty with red berries and other summer fruits like strawberries, raspberries, or even kiwis.

Its texture is as fluffy as the classic whipped cream, but it gives a slightly sweet taste of coconut to the cake. It is as fat as normal whipped cream but healthier.

The coconut whipped cream can be stored in the refrigerator for one or two days.

The assembly of the cake

Cut the sponge cake into three layers. Spread half of the creme patissiere on the first layer, and put some pieces of fruit. Cover with the second layer and do the same. Cover with the third layer of sponge cake and coat with some coconut whipped cream. Decorate the cake with fruits, candles, and all what you would like.

Let to stand for a few hours in the refrigerator before serving, so that the coconut whipped cream becomes firmer and the sponge cake is a bit soaked.

Oh, and if it’s yours, Tillykke med fødselsdagen! (Happy birthday!)

We hoped for no rain today, and it didn’t rain.

Superkilen is an open urban area, divided in three

Looking inside the greenhouses of Noma 2.0 restaur

Paint my day, as long as it is not watercolor. No