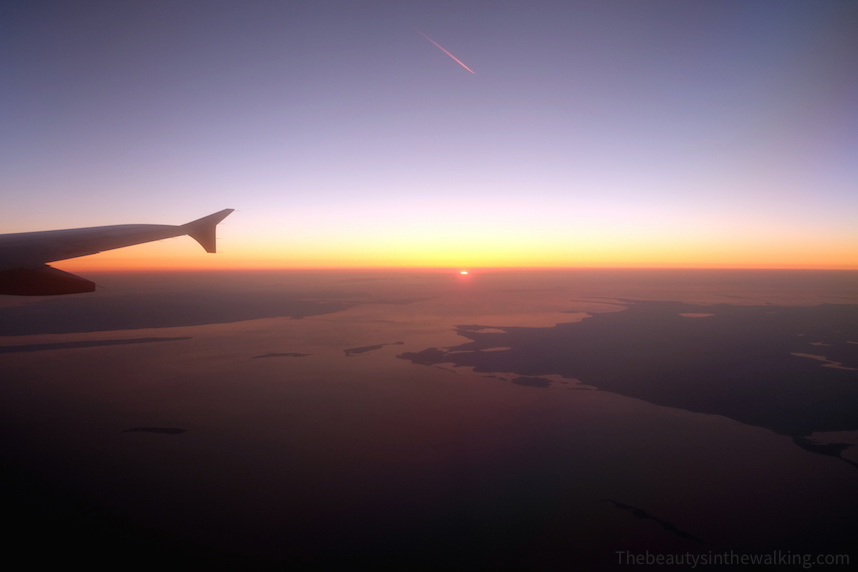 End of the trip: we’re back home. It looks somewhat bizarre to write that, but as I remember the beautiful taste of this goat tome-style cheese I had for dinner last night, I confirm. It’s real. And even more bizarrely, we’re happy to be back home.

But you know, we were welcomed with awesome French dishes and a bunch of good old friends, and that’s what we could have missed the most on the road. We’re also sentient beings, so… It seems however that we take it easily so far, even if we’ve only been back for a few days. Who knows if in a week’s time, we won’t fall into a deep depression or an inconsolable travel-blues.

But, when we think about our return, it was not going to be easy… And not for the reasons we can expect.

At the Airport in Copenhagen, where we spent the last month of our trip (not at the airport, but in Copenhagen, uh!), things were quite uncertain. In the news, the air transportation sector was about to be on strike on the day when we planned to fly back, Mother Nature was crying its eyes out on its wounded French regions, and the French government punched at the already pale face of Democracy… Add to that the fact that spring in Copenhagen has never been so nice for decades. We enjoyed the sun dressed in shorts and T-shirts while many of our fellow citizens bailed out their living room after the terrible floods. We couldn’t say that all conditions were met to go back home.

It would be exaggerated to say that we were hoping that strikes would stop us from taking the way back home but you see, it needs a great dose of motivation to come back in such circumstances.

Fortunately, we did arrive with great fanfare. Music, Maestro!

To fly to Lyon (Southeastern France), Easyjet went all out for us: “Thanks for the delay! You shouldn’t have.” It looked like a surprise on the making, kept since early morning. Nothing that extraordinary for the airline either but I understood we had a special treat when they asked us to wait an extra twenty minutes saying that the crew needed to have their daily break. That was just long enough to make us miss the last airport shuttle back to Grenoble. What a skill, really! And guess what? The bus company seemed to also be involved in the organisation as they stopped the service at 11:30 pm on a Saturday night. Many years of experience certainly but it always makes an impression! We had a perfect service à la française orchestrated with the greatest of care. I just thought: “E.T. go home!” We were overwhelmed by such a special attention …

The adventure goes on

So we stood, still breathless, in front of the bus stop outside the airport deserted by the shuttles, together with a bunch of forgotten passengers, who were like us waiting to live a promising night time adventure. In order to spice up the night that had just begun, we had to answer a crucial question: shall we share a taxi (I was already excited by the price negotiation!) or spend the night at the airport on metal seats rigorously separated by armrests. Not an easy choice, I agree but it’s not a common thing to end such a trip in such a way.

We finally decided on a taxi and gathered a team right away: five people, a bit defeatist if I may say so but still motivated for a last ride with at the end a good sleep in a comfy bed. Erik ardently jumped into the trial by approaching a taxi driver. He bravely fought against the night rate and a solid list of arguments on the misery of the working conditions.

I took over him when suddenly we lost two members of the team, who considered that 32 Euros per person for a 100-km night taxi ride was not reasonable. The price increased straight away. I quickly went round the airport to recruit new team members, considering that everyone could potentially go to Grenoble. In a moment of despair, I tried to re-motivate the tight-fisted couple, who were wandering in the airport. But there was nothing to be done; they decided on sleeping on the spot. I was wishing them good night when suddenly I saw a potential recruit appearing in the distance. I rushed towards him with my best arguments ready (Don’t want to spend the last night of our trip sleeping in an airport one hour away from home. It would have done a funny blog post though…).

By chance, he agreed and came along with me and the other member of the team – who was following me everywhere to encourage me, I guess. But in the meantime, the taxi driver had lost his patience and was gone with other customers. We had to renegotiate the price for a ride with another taxi driver. Then, to make things even funnier, the other couple walked away to call a family member. Ah, there’s nothing like a little solidarity! (But no way, we won’t stay here for the night!). Finally, irony of it all, “Asia” came up as a help. A young Taiwanese student, who had gone out to breathe some fresh air, agreed to join our crew to go back to her hall of residence on the campus of Grenoble. Relieved, I took her to the taxi station, passing by all the drivers who were staring at us coming back and thus finally putting an end to this constant procession. Apparently, they never thought we would make it. But we did!