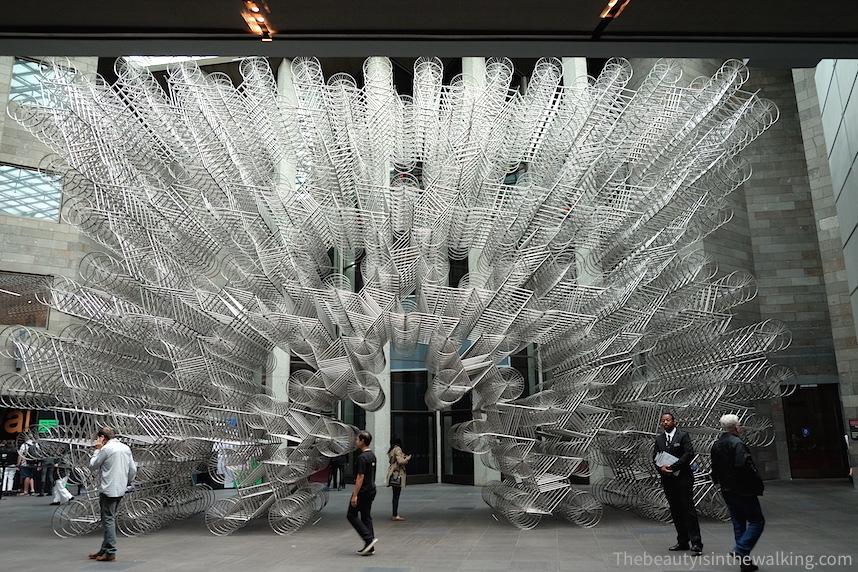 If you’re in Melbourne, you still have 10 days left to go and see the great Andy Warhol | Ai Weiwei exhibition that currently takes place at the National Gallery of Victoria until April 24th, 2016.

When we went to Melbourne last December we visited the exhibition and we were among the first to have had the chance to see it. Unfortunately, time is running and we didn’t manage to tell you about this beautiful exhibition and show you some photos.

Andy Warhol | Ai Weiwei exhibition shows the parallels and points of divergence of the work of two of the greatest artists of the twentieth and twenty-first centuries, Andy Warhol, the pop art artist and Ai Weiwei, the activist artist. It explores modern and contemporary art, life and cultural politics through their artistic activities, as well as significant influence in both their period times. The first one represents twentieth century modernity and the ‘American century’; and the second one, contemporary life in the twenty-first century, and what has been announced the ‘Chinese century’ to come, as the curator of the exhibition said. Through their art, Andy Warhol and Ai Weiwei have both redefined the identity and role of the artist in the society.

More than 300 works using painting, photography, film, sculpture, and social media are shown and witness the engagement of the two artists. Not only can we see famous works but also new major commissions and installations created by Ai Weiwei. The ultra connected artist is also very active on his Instagram account. He regularly posts images and videos related to his engagements; he is currently reporting the daily life of Syrian refugees newly arrived on the Greek coasts.

This way, please for the visit!

Forever bicycles, 2015 par Ai Weiwei.
Installation of 1500 Forever bicycles, a popular Chinese brand of mass-produced bicycles manufactured since the 1940s and desired by Ai as a child. This work suggests both the individual and the multitude, with the collective energy of social progress.

Three Marilyns, 1962 – Andy Warhol
This painting is among his first works of its kind. Andy Warhol created it when Marilyn Monroe happened to die. It is a memorial for the deceased artist as well as a reflection of the media’s insatiable appetite for celebrity and tragedy.

Dropping a Han Dynasty Urn, 2015 – Ai Weiwei
Central part of a triptych that shows the artist holding a Han dynasty urn, dropping it (see photo), and then standing behind the broken urn. This is one of the artist’s most iconic works, which demonstrates his critical engagement with China’s violent cultural tradition.

Caonima Balloons and Bird Balloons, 2015 – Ai Weiwei
Cloud of helium-filled balloons with Twitter bird and caomina (alpaca) shapes, which is the symbol of the Internet censure in China. This work was created in response to Andy Warhol’s Silver cloud (1966) and Cow Wallpaper (see below).

One of Ai Weiwei’s early drawings, late 1970.
These drawings show the poetic sensibility of a young artist whose childhood was largely spent in western Xinjiang Province, a remote desert area where his father, an eminent poet and intellectual, had been sent for manual labour and ‘re-education’ during the Cultural Revolution. The drawings – while classical in appearance – are marked by an individualistic world view and artistic experimentation at odds with the officially sanctioned aesthetics of Socialist Realism.

You’re in, 1967 – Andy Warhol
Andy Warhol was very interested in the democratic cultural significance of mass-produced consumer goods. Here the artist coated the Coke bottles with silver paint. Three years later Warhol went a step further by filling a 100 of them with a perfume he labelled ‘You’re In’ / ‘Eau d’Andy’. The Coca-Cola Company responded with a cease and desist letter.

Flowers (Hand Coloured), 1974 – Andy Warhol and his assistant, Ronni Cutrone.
Andy Warhol turned to the theme of flowers many times throughout his career. For this work, Warhol used photographs from books about flower arranging as his source material, and particularly some of the Japanese art of ikebana. Unlike his previous works of the same kind, those flowers were individually hand-coloured by Warhol’s assistant, Ronnie Cutrone.

Bicycle Basket with Flowers in Porcelain, 2015 – Ai Weiwei
In late 2013, in response to the confiscation of his passport by Chinese authorities in 2011, Ai tweeted: ‘Since Nov. 30, 2013, every morning I am putting a bouquet of flowers in the basket of a bicycle outside the front door of the No. 258 Caochangdi studio until I win back the right to travel’. Ai Weiwei posted a photo of the flowers on his website and social media on a daily basis. The project concluded on 23 July 2015. Then he memorialised the With Flowers project in porcelain, traditionally the most revered of Chinese artistic mediums.

Mao, 1972 – Andy Warhol
The source image for this portrait of Mao comes from the Little Red Book. In 1972, Mao’s image was in the media spotlight, and he was extremely popular among literary and intellectual circles in the West. This portrait of Mao as a pop-cultural icon underlines the cult of the celebrity surrounding him, and shows how the proliferation of images in media and advertising promotes consumer desire and identification.

S.A.C.R.E.D. maquettes, 2011 – Ai Weiwei
These maquettes are sculptural models for Ai Weiwei’s major installation S.A.C.R.E.D., a series of scaled models depicting scenes from the detention cell where he was held without charge by the Chinese government for eighty-one days in 2011. The work consists of six parts: Supper, Accusers, Cleansing, Ritual, Entropy and Doubt. The maquettes serve as archaeological evidence of the denial of personal freedom and dignity that Ai Weiwei and many other dissidents have experienced, and cast him in the dual roles of rebel and victim of oppression.

Cow Wallpaper, 1966 – Andy Warhol
This is the first design of a wallpaper series created by Andy Warhol.

Blow job (black and white video), 1964 – Andy Warhol
Almost everything in Blow Job, beginning with the provocative title, is perfectly calculated to frustrate and tantalise. While the viewer is led to believe something overtly sexual will be revealed, all that is actually seen is the head and shoulders of an unnamed young man in a leather jacket. Using the technique of a fixed camera and stark lighting, Andy Warhol allows the real story to play out on the face of the subject, onto which the viewer can project whatever narrative is desired.

Illumination, 2014 – Ai Weiwei
This self-portrait was shot by Ai Weiwei in an elevator while being taken into police custody in 2009. On the night before the trial of a fellow political activist in Chengdu Ai was preparing for, Chinese police officers forced their way into his hotel room around 3 am and arrested him. Here, he transforms a ‘selfie’ into a political tool. Illumination is a defiant expression of personal autonomy.

Don’t miss the free-guided tours every day at 11:30 am. This gives some keys to a better understanding of the works, their creation and the engagement of the artists.

Our advice: the exhibition is very dense. It is worth coming early in the morning and spending the whole day there.

See all the article about Australia.