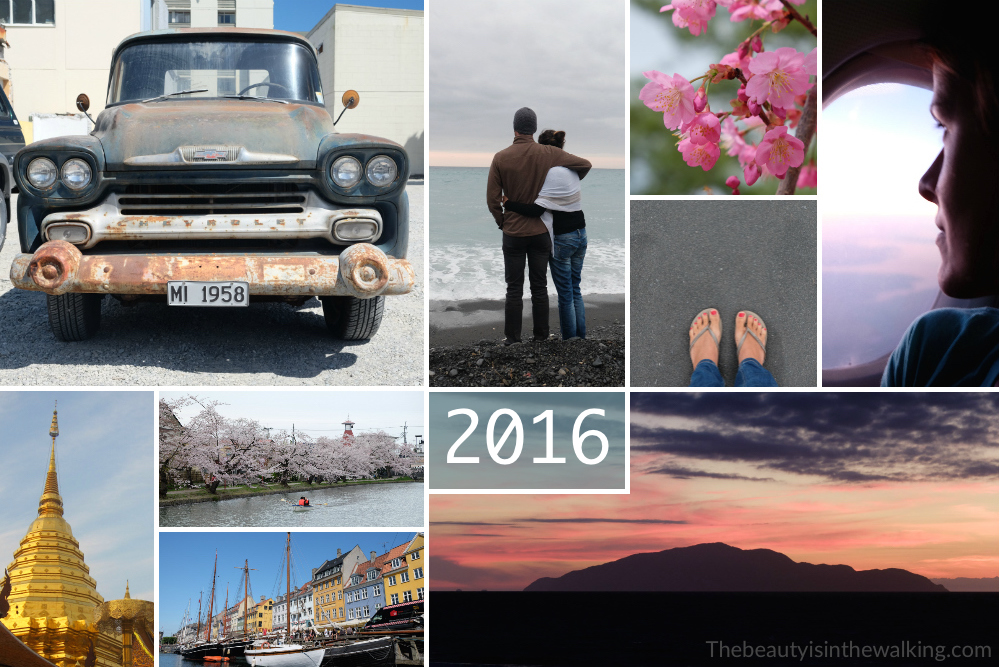 End of January, already. Is it still time – like for wishing a happy New Year – to have a look at what happened last year and make a quick review of it? Yes, uh! 2016 was for us full of adventures; we were constantly on the move and changed so many times our way of life. It has been the end of our long trip and the beginning of an expatriation. Not a single day was alike; nothing was really planned in advance. And now it looks like a second adventure showing up after the first one. Retrospective and prospects.

End of a trip…

Let’s have a look back even earlier than last year. When we spread around the news that we were going on a long trip, we could see faces smiling and eyes widening. Quite evidently, travelling is still a dream for people of all ages. Leaving, taking the time, taking a break in one’s routine, even for a few months; all these are still a dream. Of course, not for everybody, and that’s fine. But for many of us it is. And surprisingly enough, many of the people we announced the news to responded something like: “I’d have loved to go on such a trip, but you know…”

“That would be awesome to go on a long trip one day, but you know…”

So, apparently setting off on an adventure is still a dream – it looks like a cliché. And it was also a dream for us. We also said to ourselves: “That would be awesome to go on a long trip one day, but you know…” But what? It’s like, we’re getting settled in our comfy routine, and days go by. We don’t feel bored either. But we have a loan going on, a fulfilling job, good friends, a loving family, etc. Well, we’ve chosen a path to follow and we haven’t had any opportunities to go on such a long trip yet.

And one day, it does happen.

The closer we are from the D-day, the faster time passes. The day before our departure we were exhausted. And when we arrived at our first destination, we almost slept two full days. I suppose that was the time for us to put down our bags, in a way to land, and to be able to open a new chapter. After having sold stuffs, left things behind, tidied up some parts of our past life, we finally went on a new adventure.

But let’s go back to 2016. The first third of the year was the end of our trip: in January we ended a two-month stay in Australia, in February we went on a road trip in New Zealand, in March we returned to Thailand to experiment meditation on a 10-day retreat, in April we made a detour to Japan giving the excuse of springtime, in May we went back to Europe via Copenhagen (lo and behold!), and in June, we returned to our homeport, in the French Alps.

In the end, all the images and emotions were overlapping in our minds. We were full of all that we had seen and lived during the trip. We had it easy, we met lots of people, we laughed with people and about ourselves, we learnt a lot, we got upset sometimes, and we received so much, much more than we gave. Well, we lived in different ways, in different places.

But among all that, one thing remains. One single thing. Like a kind of common thread.

“The further we travel, the more obvious it appears.”

It might seem a bit stupid, or too simple a thing. But it’s something that we tend to forget, and particularly now. That’s also something we clearly realize when travelling. I’d even say that the further we travel, the more obvious it appears. It’s surprisingly simple: we realized that we’re all the same. It’s even striking how we all want the same thing. We all want to be happy and live a decent life, surrounded by our beloved ones. That’s all.

At that point you tell me: “Wait! You went to the other side of the World to tell me that we are all the same?” Yes, I do.

Because actually, we tend to forget it.

As 2017 begins, we took a somewhat different view of things. We not only ask ourselves how we will manage to pay our rent next month, but also we also think about these Cambodian kids whom we laughed so much with around the pepper plantations. Are they now able to go to school? What about Shangri-La’s Old Town: has it finally been rebuilt? Will I eat once more this marvellous pasta soup homemade by this lovely old couple in Baisha? What about this awesome local mushroom dish we ate in Shaxi? Do the two Chinese young ladies still work at the hostel in Pu’er? Did Miho enjoy a beautiful snowy view of the Mont Fuji this winter? And all those people we crossed paths with, how are they doing? Do they live a good, worse or better life than when we saw them?

In a way, we somewhat live everyday with all of them.

At first glance, we could think that our lives are far different from each others’. But in fact, we so much look alike. They have become part of us; we are connected to each other. We are a whole. I often say to myself: fortunately, there are Belgian people and their off-the-wall humour, Japanese people to invent top comfort standards even in the toilets, Chinese people to remind us to behave innocently and spontaneously, French people to carry on awesome culinary traditions, American people to show us that everything is possible (except that it has gone too far this time…). Well, we’re like a big family with its good moments, its different backgrounds, its divergence of opinion… and even its borderline uncle who opens lively discussions during family meals.

… Beginning of an expatriation

Last June, we finally returned to the departure point of our trip, with a mix of joy and apprehension, and of course a few last adventures on the way back. But we were happy to see our families and friends again. Quite unexpectedly, their first question was for most of them: “So, what’s next?”

They had sniffed it out.

“We were like kids, spinning a globe and stopping it with the finger.”

I don’t even remember when we have decided to continue the adventure by settling somewhere else; I mean to go and live abroad. I think we never really made any decisions: that was evidence. So, a few months before the end of our trip, we had fun making a list of destinations where we could imagine we could live. There’s nothing more exciting! We were like kids, spinning a globe and stopping it with the finger. Come on, let’s decide where we’re gonna live next. The world was now ours.

Then, our ideas became clearer and the list got shorter. Two areas in the world were in competition, two cities – quite opposite – were finalists: Tokyo and Copenhagen. To make it short, we finally gave priority to the Danish way of life rather that to Tokyo’s eccentricity and liveliness. For many other reasons, we ended up by settling in Copenhagen.

End of August, we stored our backpacks in the closet and filled in our suitcases, and we took off towards this nice Scandinavian city of our good old Europe. A completely new and very different adventure began, in a less far-off but still exotic place.

The last months of 2016 were made of administrative stuffs, new encounters, mutual aid, family reunions, discoveries, and also stress and uncomfortable situations. But it showed up how promising the next months or years would be. We don’t really know what the future will be made of, but I think that we finally like to write our own story as we go along. The beauty is…

Enough about us. What about you? Would you imagine going away on a long trip or to live abroad for some years? Even if you’re not ready for it now, it’s always good to dream. Come on! ;-)