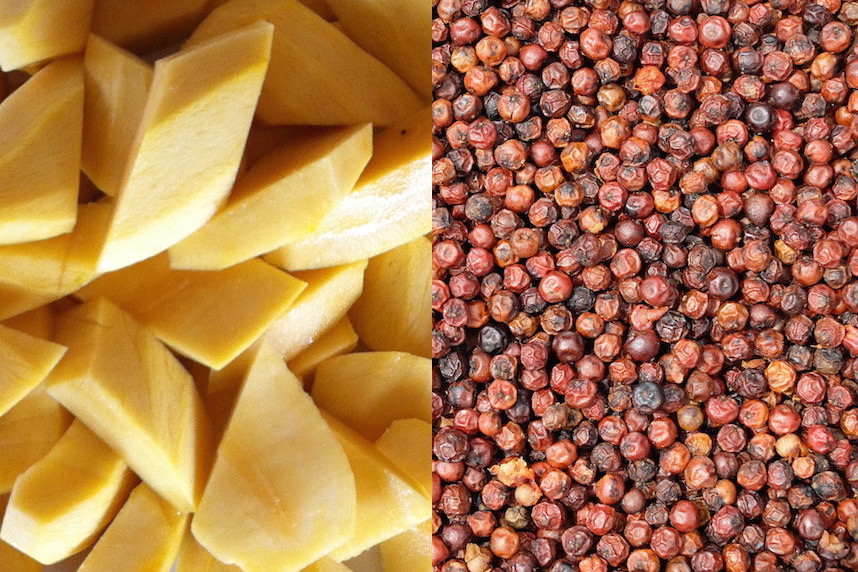 During our stay as volunteers at Sothy’s Organic Kampot Pepper Farm, where mangoes grow by hundreds, I couldn’t help dreaming of some recipes combining this delicious fruit and some red Kampot pepper, the fruitier of the three produced at the Farm. It should be said that we have hardly cooked for three months and a half and I am seriously missing it by now, as I love to test, to mix, to match tastes and colours… So, please let me have my dreamtime for a while, and if you feel like it, come along!

This combination of mango and red Kampot pepper can be surprising at first. However, after a quick research on the Internet, it turned out to be quite a good idea. So, here are three sweet and savoury variations inspired from these researches and to which I added my own touch. Let’s bet you will like them!

Note : This recipe has been inspired by this one (in French only), which has been adapted in many ways.
I’ve decided not to put any mint in order to let the Kampot Pepper flavours free themselves: Kampot Pepper is so fruity and fragrant that it deserves exclusive use! However, you can also add some mint and test, especially if you don’t have any Kampot pepper and replace it with standard black pepper.

Note:
– This dessert is inspired from an old family recipe of Flambéed bananas, already tried and tested – and even adopted – many times. Here, I made some adaptations by changing a few ingredients, which match very well together– at least so said some sharpened palates.
– I’ve chosen to use coconut oil because it brings a nice little taste that goes well with mango, and also because it is known to have several health benefits that butter doesn’t have. Moreover, it stands well to be heated in a pan. Indeed, virgin coconut oil reaches its smoke point at 177° C (350 °F) (which is less for sunflower oil for example), knowing that pan-frying doesn’t exceed 180 °C (356 °F).

Note: the recipe is a pure product of my imagination, supported by a huge experience in the subject. Be careful it may be super tasty and give you ideas. :-)

Are you also a pepper addict? How do you cook it? Share your craziest associations and best recipes in the comment section!